The David Grisman Quintet is a self-styled alternative bluegrass/acoustic jazz band founded by David Grisman in 1975 in San Francisco, California, USA. Inspired by such diverse genres as Bill Monroe's bluegrass legacy and Django Reinhard's 1930s swing, the Quintet created an entirely new style of acoustic music, and has inspired countless other musicians to take similarly eclectic approaches to their music.[1] Since its formation, the Quintet's members have included guitar virtuoso Tony Rice and multiinstrumentalists Mark O'Connor, Mike Marshall, Darol Anger and Jon Sholle. The Quintet has performed and recorded with special guests such as violin great Stephane Grapelli,[2][3] and remains active, with appearances scheduled at several music festivals around the U.S. in 2014–2015. The National Public Radio program Car Talk uses the band's instrumental "Dawggy Mountain Breakdown" as its theme music. 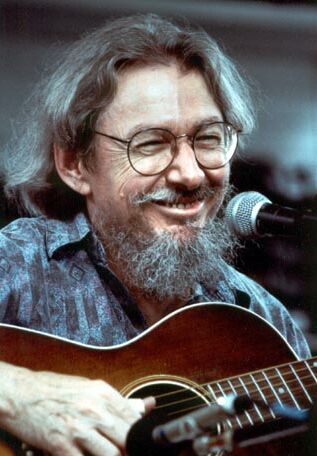 Norman Blake (born March 10, 1938, Chattanooga, Tennessee, United States) is an American instrumentalist, vocalist, and songwriter.[1] In a career spanning more than 60 years Blake has played in a number of folk and country groups. He is considered one of the leading figures in the bluegrass revival of the 1970s and is still active today, playing concert dates and making albums with his wife Nancy Blake.

When he was one year old, his family moved to Sulphur Springs, Georgia where he was raised.

Norman Blake quit school at age 16 to play mandolin in a band. His first band, The Dixie Drifters, played the Tennessee Barndance on WNOX Radio in Knoxville, TN. Later, they went to WDOD Radio, and from there to WROM-TV in Rome, GA where they stayed until 1956. Norman then worked with banjoist Bob Johnson as The Lonesome Travellers. They joined with Walter Forbes in making two records for RCA. In 1959, Norman left those groups to go with Hylo Brown and the Timberliners, although he continued as a duet with Bob Johnson in making several guest appearances on WSM's Grand Ole Opry.

Upon returning to the United States, Norman taught guitar and played the fiddle in a country and western dance band three or four nights a week. He also made frequent trips to Nashville to play sessions and, for a time, played as a member of June Carter's road group.

In 1969, Norman moved to Nashville to do the Johnny Cash Summer TV show. Along with country and western sessions, Norman recorded with Bob Dylan on The Nashville Skyline album. He was a member of Kris Kristofferson's first road group, playing guitar and dobro, and did a seasonal tour with Joan Baez, playing mandolin, guitar, and dobro; Norman recorded with both groups. He left Kristofferson to join and record with John Hartford's Aereoplane Band. After that band dissolved, Norman toured with John Hartford as his accompanist for 1 1/2 years, during which time he recorded his first solo album, Home in Sulphur Springs. He also received a gold record for his participation on the Nitty Gritty Dirt Band's legendary, Will the Circle be Unbroken album.

In the ensuing years, Norman and his wife Nancy Blake have toured extensively, playing to larger and more dedicated audiences. Again, Frets Magazine Readers Poll Awards voted Norman first place, this time in the category of Best Multi-Instrumentalist of 1986. Since 1989, the Blake's have received four Grammy nominations in the "Best Traditional Folk Recording of the Year" category for their projects, Blind Dog, their Shanachie debut Just Gimme Somethin' I'm Used To, and Shanachie releases While Passing Along This Way and The Hobo's Last Ride.[3]

Although known as one of the most prominent acoustic guitar flatpickers, Norman Blake is a multi-instrumentalist and vocalist. Other instruments he plays include the mandolin, 6-string banjo, fiddle, dobro, banjo and viola.[4] He is known for his loose right hand guitar technique, which arose out of his mandolin technique. Also well known is his devotion to 12 fret guitars, including Martin 00s, 000s, D18s, D28s, and, most recently, Gibsons, like his 1929 12 fret Nick Lucas special.

Blake is best known for his work with John Hartford, Tony Rice, and his wife, Nancy Blake. He has played backup for Johnny Cash, June Carter, Bob Dylan, Steve Earle, Kris Kristofferson, Ralph Stanley, and Joan Baez. Blake also played on the Nitty Gritty Dirt Band album, Will the Circle Be Unbroken, for which he received a Gold Record.[5].

From 1969 to 1971 he was a regular on ABC's The Johnny Cash Show, supplementing Cash's band the Tennessee Three.

Blake is listed in the credits of the Bob Dylan album Nashville Skyline and the Johnny Cash album Orange Blossom Special. He was featured on the Steve Earle comeback album Train A' Comin' and on the multi-platinum O Brother Where Art Thou? soundtrack, which ignited new interest in old time music and won a Grammy Award for Album of the Year in 2002. Blake participated in the "Down from the Mountain" tour which resulted. Blake also played on the 2007 album Raising Sand by Robert Plant and Alison Krauss, which won five Grammy Awards.

Most of the music that Norman Blake plays could be described as neo-traditionalist Americana folk and roots music (folk, bluegrass, country, blues), and many of the songs he plays are traditional, but he plays this acoustic type of music with a style, speed, and quality that has evolved and progressed in the modern age. Though probably best known for his fluid renditions of classic fiddle tunes transcribed for the guitar (Fiddler's Dram / Whiskey Before Breakfast), Blake has also written songs that have become bluegrass and folk standards, such as "Ginseng Sullivan" from Back Home in Sulphur Springs, "Slow Train through Georgia", "Billy Gray," and "Church Street Blues".